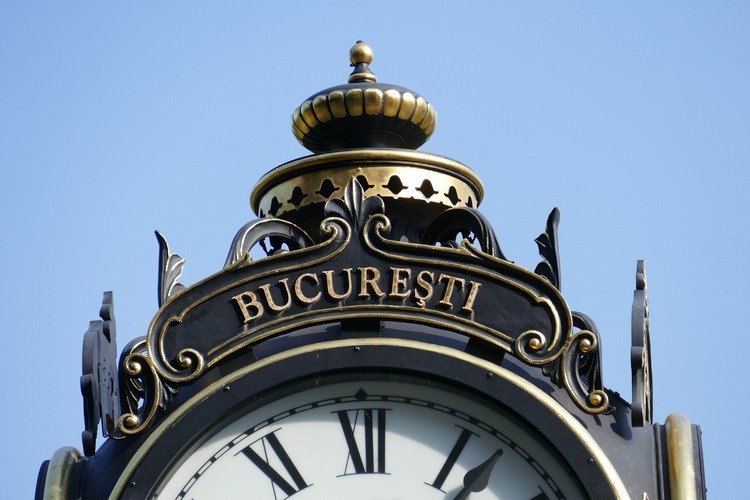 I last left our story of Bucharest on 31st March.  Do you remember?  We were locked down in the Old Town in Bucharest, waiting patiently for 4th April so we could move into a new apartment – one that wasn’t so small, and that wasn’t in the centre of the city.

Although not much has happened since then, apart from moving, I received an email from Rita asking me ‘When are you going to let us know about April in Bucharest?’.

So, here I am.  This post is all about April in Bucharest.

From 1st to 4th, we were still in our studio in the Old Town.  Nothing much happened in those 4 days.  Daily walks, internet, sleep, eat.

Going to the new apartment

And then, on 4th, we packed our stuff and left the little studio apartment.  We walked across the road to the hotel that we stayed in on the first night.  Although hotels are currently forbidden to take new guests, their reception was still open, and we’d asked them the day before if they could order us a taxi the next day, to take us to the new place.

So I popped inside and the kind guy at reception called a taxi for us.  It arrived within 3 minutes and we were on our way to our new apartment.

I’d already checked on a map how to get to our new place, so I was sure that I could follow how the taxi was going to get there.  It was basically going along two big streets, not far, then a couple of smaller ones.  However, I suspect that he took these two useless tourists on a bit of a trip, the long way, because he took a very strange route, and it took a long time to get there compared with what it should have been (according to my calculations).

Never mind, despite that it still wasn’t expensive – less than the price to just get into a taxi in Australia!  So, I’m not complaining.

We went inside the building, took the key from the letterbox, and went up some stairs to the first floor.  It’s an old building, the kind I love because they’ve got history and feeling and emotion, unlike new, modern buildings.

We unlocked and opened the door.  It seemed like a palace!  I was overwhelmed, it was huge, and clean and wonderful!  Isn’t it amazing how something so simple like appropriate housing can make you feel so grateful?

We put down our suitcases and backpacks, and took a trip around the apartment.  By the time we got to the bathroom, I was in tears.  Just the emotion and the relief to have a big flat, with a separate bedroom, living room and kitchen, a washing machine that worked, and two balconies – it was unbelievable.

Although we liked the studio in the Old Town when we first arrived, it would have been impossible to stay there long term.  Already the two weeks we stayed there were more than enough.

This new apartment is big enough for us to each have our own space.  It’s clean and has big windows to let in the light, and if we have to stay in Bucharest longer than we planned, this is where we want to stay.

When we’d arrived in the taxi, the driver asked us why we were staying here, so we told him that it was too expensive in the centre.  He said it’s not a good area, and to be careful. Well, it looks like a ‘normal’ residential area to me, and although it could be unsafe at night in normal times, with a 10pm curfew and nothing open I’m not sure there’s any risk to us staying here!

Another person from Bucharest told me that this area has a bad reputation. However, someone else said that it’s a nice place, and that we’re lucky because there will be local people and families around, so we won’t feel so alone, as we did in the deserted Old Town.

There are supermarkets within walking distance, and other small shops, which are now starting to re-open (as I’m writing this, it’s the end of April).

So, I don’t know if it’s dangerous.  A lot of people say that Moscow is dangerous, but I never felt that while I was there.

We settled into our new apartment quickly. The owner (it’s an Airbnb apartment) lives upstairs on the second floor, and is a very nice, young guy who is ready to help us with whatever we’ve asked for (so far only a mop and some air freshener spray for his spraying devices).

We’re ready to stay here as long as we have to, it’s very comfortable.  Oh, plus there were a couple of discounts on the price of the apartment.  A discount for booking more than a month, and a special discount because of these hard times.

We initially booked 6 weeks. After being here a few days, we decided that it probably wouldn’t be long enough, so we booked another 4 weeks.  So we’ve paid up to 15th June.  We may even have to stay here longer if we’re going to have problems travelling to another country.

Our routine is pretty much as it was in the Old Town.  Sleeping late, cooking and eating healthy food (I’m still on no processed sugar, sweets, biscuits, cakes, or chocolate), a daily walk (which includes sitting at the bus stop for 10 minutes to get some sun) or shopping, exercises in the living room (I can touch my toes now!!).  And a lot of time online, or reading, or watching films.

We’ve taught ourselves a few words of Romanian for communicating in the shops.  ‘We don’t speak Romanian’ is probably the most useful, although ‘thank you’ is a big help too.  We’ve also learnt how to count to 20, and we count in Romanian while we’re exercising, which is fun.

Easter came and went – both of them!  Here it’s mainly Orthodox, so Easter is at the same time as in Russia.  I managed to resist the Easter chocolates in the supermarket.

I was worried about being stuck here longer than the 90 days visa free that I’m allowed as an Australian passport holder.  There aren’t a lot of options for travelling at the moment, even if I wanted to go back ‘home’ to Australia.

There was a woman in a Facebook group I’m in, for expats in Bucharest, who is in the same position as me, although she’s Canadian.  Anyway, she connected me with some other women all in the same situation, and over the last few days one of the woman has received a reply from border control, saying that none of the days during the ‘state of emergency’ will be counted towards our 90 day stay.

Which is great news, because it’s been a ‘state of emergency’ the whole time I’ve been here!  So that means, that when the ‘state of emergency’ is lifted, I’ll still have 90 days here, to visit a bit, but also to wait until the flights open up again and we can find somewhere else to go. No need to panic.

The end of lock down

Our lock down ends on 15th May, however there will still be a lot of restrictions.  Basically, as far as I can understand it, we will no longer need a permission slip to go out, we’ll be able to go a little further for shopping, and other shops will re-open.  But restaurants will still be closed, as well as bars and cafes, and we won’t be able to travel to other towns without a good reason.

We won’t be able to be outside in groups bigger than 3 people, and we’ll have to wear masks in enclosed public spaces and public transport.  I’m sure that there will be other restrictions, but it will be nice to be able to go for a walk further than around the block.

But it’s a start.  And hopefully we’ll be able to visit some other towns before we have to leave Romania.

So, basically, that’s what April in Bucharest looks like.  I hope that May will be a little different.

What was your April like?  All the days pretty much the same, or did you have some variety?  Let me know, I’m looking forward to hearing about your experiences in your part of the world.

14 thoughts on “April in Bucharest – Locked Down”