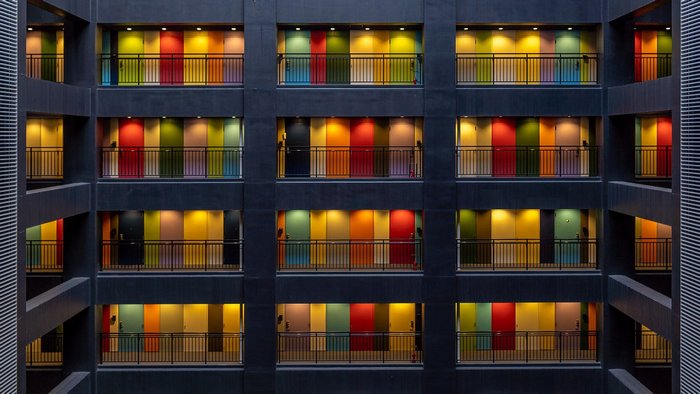 I grew up mostly in Perth, Western Australia.  It’s a small city and quite modern.  There aren’t many old buildings left anymore.  It was fashionable in the past to tear down the old to make way for the new.  So the architecture there is mostly very modern.

Because of that, I didn’t really notice doors while I was growing up.  Doors were just doors, mostly quite new or modern. There’s nothing special or unusual about doors in Perth.

Of course there were doors all around me every day.  There were front doors, back doors, bedroom doors, toilet doors, classroom doors, library doors, shop doors, shed doors, fridge doors, cupboard doors, garage doors, etc.  I could list a lot more but I think it’s clear that there are many doors in our day to day life.

Do you ever think about doors?

Probably only when you have a problem with them, or have to replace them.  Sometimes a door sticks and you have to pull it hard to open it.  Or maybe you have a door that doesn’t close easily for some reason.

I never used to think about doors at all.

Paris is beautiful!  There are many beautiful buildings, bridges, streets, statues, parks…and doors!

It was the first time that I realised that doors could be beautiful or unusual, or even just strange.

The first photo I ever took of a door was in Paris.  I was quite timid back then and I was afraid that someone would come out of the door and not be happy to find a tourist taking a photo of their door.  So I took the photo and walked away quickly.

The doors were wooden, huge, and old.  Just beautiful!

Now, looking back, they’re not the most beautiful doors I’ve ever seen, but they made me realise that I should look a little more closely to the doors around me.  They can be worth taking notice of.

I haven’t always had my camera with me when I’ve seen a beautiful door, but I do have a lovely collection of door photos that I’d like to share. I have more, but I’ve chosen my favourites for you.

First here are some doors I came across in Bucharest, Romania. It was such a pleasure walking around the city, especially after being locked down there for two months not being able to discover the beauty of this wonderful city.

When we were finally ‘allowed out’ we took to the streets.

This is one of the most beautiful doors I’ve ever seen. Maybe one of my Romanian friends can let me know what this building is, although I think it’s something to do with fishing and wildlife.

Here’s a door which has a little slot next to it for the post. Cute.

I’m not a big fan of graffiti, but I like how the graffiti fits in with the design of this door.

This photo was more for the effect of the doors in the foreground and background working together. They were in a small auction house/gallery.

I really loved this little blue door. There are quite a lot of run down and abandoned buildings in Bucharest, especially near and in the Old Town. This was one that captured my eye.

Sometimes just a plain, simple door can be worthy of a photo – like this one.

It was so much fun wandering around Bucharest, not knowing what we’d find. I think this was the door to a kind of utility room, maybe for water supply or something.

This is the entrance door of the apartment we stayed in for 3 months. It was a wonderful apartment with big rooms and we were really happy to have such a nice place to be locked down in. This entrance door represents safety and comfort to me.

Here’s another entrance door which was just down the road from where we lived. I liked the design of the red metal doors.

And don’t you just love this little purple door?! It’s the door to a small shed in the street where we lived.

And one final door from Bucharest. Really well made and classy wooden doors.

And here’s a door in the famous Bran Castle, which we visited while we were stuck in Romania. What a great excursion that was!

Having spent more than 12 years in Moscow, I saw a lot of Russian doors! There are far too many to put here, but here are some I want you to see.

I really love this door for some reason I can’t express. It was not far from the last apartment we lived in so I saw it often.

A door with ‘Just Kiss Me’ written on it just has to belong in this post. Sometimes I do like graffiti!

Some old and neglected doors. This in an entrance to an apartment building but I’m not sure it’s still in use.

Sometimes in cold countries snow can cause a problem for doors. Here’s a door that’s got a little snow problem.

And this was across the road from us. This door was used occasionally by the occupants, but not when the steps were covered in snow.

Look at the decoration above this door. I find it sad that they don’t make doorways like this anymore.

And while this modern door isn’t particularly beautiful, it is functional. It’s a resting place for tired pigeons.

A big red door with an interesting design above it.

Here’s a very old door, simple but functional. I found that doors which are the entrances of apartment buildings are so varied in Moscow. There are so many different designs and materials, depending on the time period they were built in.

And here’s a brown one with an inbuilt window.

I have no idea where this door leads, but I’m very curious! I’m not sure that padlock is very strong.

These doors are on a building that may have been some kind of factory in the past. I’m not sure if the building is in use now. I love the designs above the doors, but I also love the colour they painted the doors.

One thing you may not know about a lot of Russian apartments, at least the old ones, is that each apartment has two doors. I don’t know why, and I don’t know if they were originally built like that or if they added the second door at a later stage. Maybe one of my Russian friends can let us know in the comments.

So here are two photos of our doors to one of our apartments in Moscow.

From the outside, first you unlock and open this one.

I still think it’s a bit strange, even after all the years I spent there.

We haven’t been in Bulgaria very long, in comparison to the time we spent in Russia, but I’ve already found a number of doors in Bulgaria that I have been compelled to photograph.

Let’s take a look at some of them.

This door is in the Old Town of Veliko Tarnovo. I don’t know what’s behind it – any ideas?

Also in the Old Town, some lovely light green doors.

These doors are the entrance to some apartments in the main street of Veliko Tarnovo. They do look like they need some tender loving care, but I kind of like them like this.

These doors are garage doors in Veliko Tarnovo. I like these because of the little flower design they’ve put on each of the three parts. Can you see the tulips?

I just have two more photos for you. One is from Riga, Latvia, and the other from Vilnius, Lithuania. They are two very interesting cities as far as architecture and doors are concerned.

I can’t remember exactly what kind of shop this was in Riga, but it was something to do with fish, or underwater things. So you can see that the door slightly resembles a submarine’s door. Although I don’t think a submarine has glass in its door, does it?

And our very last door is in Vilnius, an abandoned building, but such a beautiful doorway.

And there you have it. Some of my favourite doors in the world.

Do you also like taking photos of doors? Do you have a favourite door photo? If you send me your door photos I’ll put them in this post! cheryl@borninacar.com